In early February of 2010, a tour group of alumni from Yale University visited Kibaoni and were inspired by the students and staff. From Headmistress Anna Mzava they learned about our foundation and contacted us and asked what they could do as a group to help. After several planning sessions between Jim Furner from our foundation, members of the Yale Alumni group and the Staff and Parent Committee of the Kibaoni Primary School it was determined that building a combination kitchen/dining hall would allow the school to take advantage of a World Food Organization program that would provide all 750+ students with a second meal each school day.

The Yale Alumni Tour group took the initiative to raise $9,000+ for the dining hall and one of its members, Anne Elbrecht, donated an additional $10,000 to build the kitchen.

While all this was taking place Sylvia Furner, wife of Jim Furner, gave $10,000 in memory of an aunt and uncle. Part of these funds was combined with other previously collected funds, to build a much needed water reserve tank. The balance of Sylvia’s gift has been used to install initial solar panels and related batteries. These panels were placed on the library/staff office building, allowing students and staff to utilize several computers given to the foundation for such use. 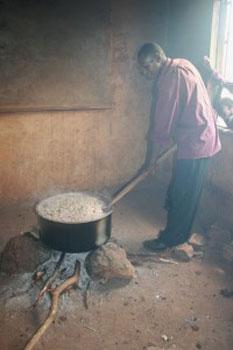